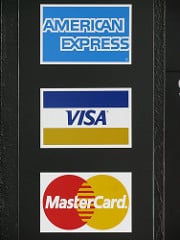 Unlike Visa and Mastercard, who publish their discount rates (known as interchange fees), American Express does not.  However the American Express 2007 Annual Report reveals that, on average, Amex’s discount rate was 2.56% (2007), 2.57% (2006) and 2.58% (2005).  That is about 0.77% higher than the average Visa interchange rate, which is 1.79%. However, that average includes the much lower rates that American Express charges some very large companies.  For example, the book Paying With Plastic (P.196), describes the sweetheart deal between American Express and Costco.

In 1999, American Express and Costco…announced that they would be partnering to offer American Express consumer and corporate charge cards that also functioned as Costco membership cards…as a result of the partnership, American Express became the only payment card to be accepted at Costco, which had only accepted Discover for the previous eight years.  Industry estimates suggested that the merchant discount paid by Costco to American Express was as low as 1.1 percent.

Let FeeFighters help you find the best deal on credit card processing for your business. Start here to get multiple bids from top quality processors at no cost, all apples-to-apples comparison, and transparent pricing. What you see is what you get. Users save an average of 40% on credit card processing with the most transparent pricing: interchange plus.

As a dentist American Express charges me 2.9%. It’s not much higher than what I pay to accept Visa and Mastercard business cards.

I experience a typical higher gross sale amounts with my American Express customers which offsets the higher fees.

I think in making these comparisons it’s only fair to also factor in the following:

Once these items are factored in, I believe the argument for card use is more compelling.