According to Paul Graham, startup density is what saves startups in places like Silicon Valley, as it provides: An environment that encourages startups Chance meetings with helpful people A social norm of optimism Now, the idea that high startup density (a large number of startups relative to your city size), increases your startups’ chances of success […]

According to Paul Graham, startup density is what saves startups in places like Silicon Valley, as it provides:

Now, the idea that high startup density (a large number of startups relative to your city size), increases your startups’ chances of success isn’t groundbreaking.  In fact, the absolute belief in high startup density (HSD) is the reason why a lot of people leave places like Detroit and Cleveland to go to Chicago or San Francisco.  HSD is also the same reason why Brad Feld argues that Boulder is such a vibrant entrepreneurial community. The issue is though, that recent data suggests that living in a city with a higher startup density does not necessarily guarantee a higher rate of startup success.”

In order to test out the startup density idea, we used a cool website called Startup Data Trends, made by Bocoup and Atlas Ventures.  Startup Data Trends allows you to browse startups from the site AngelList and learn more about different cities, market segments, average valuations and amounts raised- like a Yahoo Finance for startups.  Using Startup Data Trends we can take a data driven look at the idea that startup hubs are the best place to be.  (Hint, the data seems to say they aren’t).

In the series of graphs below, we compare the success of startup hubs by using two metrics, as well as compare the startup density using two different measurements.  For the success of startup hubs, we used the average valuation and average money raised per startup by city.  While, to compare the size of the startup hubs, we used two different measurements: startup density, the number of startups per 100K residents, and the number of total startups per city. We chose the cities that had at least 150 data points for valuations, so places like Boulder didn’t quite qualify (sorry Brad).  Now, if Graham and Feld were right and HSD does lead to better startup success, the average valuation and average amount raised would decrease as the startup density goes from higher to lower.   However, you don’t see this trend- the success values consistently go up and down, and in no particular order.

This data is in no way conclusive (the averages can be skewed in some cities by a couple of companies with large valuations, etc.) however the initial data seems to show that the success of startups in places like Silicon Valley, cannot necessarily be attributed to HSD.

Success of Startup Hubs by Startup Density
The following graphs show the success of different startup hubs in terms of average valuation and amount raised by startups, measured against the startup density (startups per 100K residents). 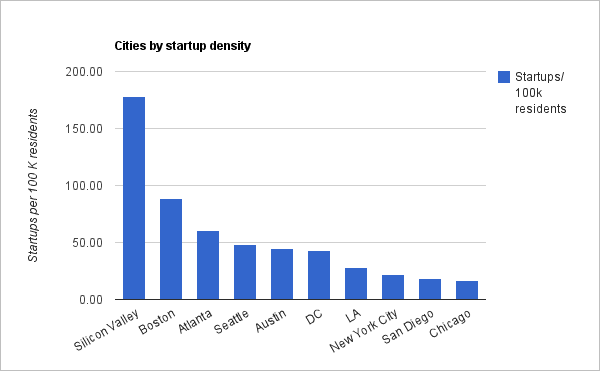 The far left of this graph is not surprising at all, as Silicon Valley has twice the startup density of it’s nearest competitor, Boston.  What is relatively surprising though, is how New York City and Chicago rank near the bottom in terms of density.  However, it seems many great new startups are coming out of these cities (Tumblr and GroupMe in NYC, Groupon and Grubhub in Chicago to name a few), while the startup density of Chicago and New York City is really decreased by the fact that these are huge cities with other stuff going on. 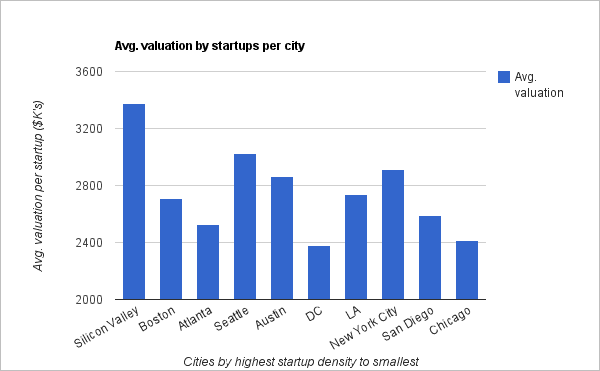 This is where the data really gets interesting, as the graph doesn’t show the expected answer of higher startup density leading to higher valuation, especially when you don’t count Silicon Valley.  Since the cities are ranked from highest startup density to smallest, you might expect the highest valuation on the left and the lowest on the right, however, this is not what you see.  For example, Boston and Atlanta have very high startup density, but have relatively lower valuations, while New York City has a relatively high valuation, but a low startup density. 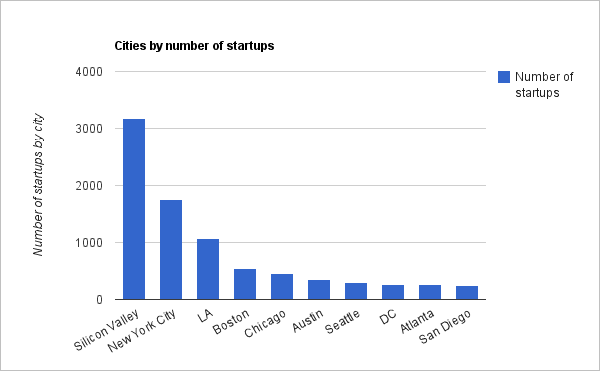 Startup Hub success by Number of Startups in Each City
The following graphs show the success of different startup hubs in terms of average valuation and amount raised by startups, measured against the number of startups per city.

Just to make sure that our measurement of startup density isn’t to blame for the inconclusive evidence, we took a look at the number of startups per city.  The top five is as expected though it’s a bit interesting that Boston, a much smaller city, has more startups than Chicago, but I guess that is what happens when you get a high density of top research institutions.

In this last chart you can see the cities in order of most startups to least, and the measurements of success on the two y axises, average valuation and average amount raised.  Even when we change the measure of the startup hub from startup density to straight number of startups, you still don’t see the left to right downward slope that Brad Feld and Paul Graham might expect you to see. In fact, the data seems to be very inconsistent and it doesn’t seem to show that having more startups in a city leads to more startup success. 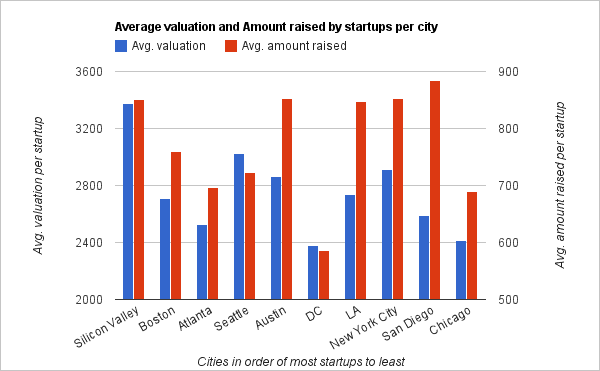 Overall, I agree that having more entrepreneurs around you is awesome, since entrepreneurs are generally fun, intelligent, encouraging people.  However, if you take away the fun of an environment of entrepreneurs, the data doesn’t seem to support the idea that higher startup density actually leads to more startup success.  So before you pack up your bags and join the flock down the yellow brick road to Silicon Valley, take a minute to consider whether or not you actually need to surround yourself with other startups, because the data seems to suggest your startup success doesn’t necessarily depend on your proximity to other like-minded individuals.

This article is also defining “startup success” as the amount of money raised. I’d be interested to see data about startup revenue and exit sizes vs. the density. Fundraising is absolutely not a measure of success. It’s simply a measure of how well investors can be convinced by founders to part with their money.

At long last we’re starting to see some analytic intellectual rigor and data analysis applied to the folk wisdom that has been the source of advice to entrepreneurs.

Of course your article raises many more questions than answers, such as “how do you define a startup?” Or, “what is success?”

But in any case, you’ve helped us take a step in the right direction. However well-written and inspiring his articles, Paul Graham is only giving us one guy’s (biased) opinions.

Thanks again for taking the time to write up.

Now just remember, you absolutely need a co-founder and startup incubators are the best place to start your company.

I would be interested to know what the data looks like for startup success in places that are not startup hubs. I would classify each of the cities in the study as somewhat of a startup hub, but what about cities that are trying to build startup communities in places that are outside places of high activity? Cities that come to mind are Providence, Cincinnati, Syracuse, Iowa City, and Pittsburg.

Still, this is a very good study and is useful insofar as it goes.

The daytime population of Manhattan alone (not even all of New York City) is quite a bit larger than the total population of Nevada (to take an extreme example.) Having a bunch of startups in the same Union Square neighborhood is self-reinforcing; having them spread out over an entire state would not be, regardless of how many other people lived in either place.

Really great post, but as someone else has already pointed out, money raised and valuation is not how one should measure success. Unless of course your goal is simply to raise money. My goal is to build kick ass products that customers beg me to purchase.

Thanks for posting this along with the background data, although it raises a lot more questions. I’m also a little curious why the Y-axis on your financial charts (avg valuation, avg amount raised) is set to something other than zero.

Great stuff, and very helpful when most of this kind of data is locked behind the paywalls of Thomson Reuters and Dow Jones.

Thank you for this

I think a little isolation is actually extremely useful to a startup — less distractions. more focus. less naysayers or cheerleaders. more concentration on the work and challenges at hand. less meetups and events. more time working!

Thanks for the suggestions you have contributed here. In addition, I believe there are several factors which keep your motor insurance premium decrease. One is, to consider buying cars that are from the good set of car insurance providers. Cars that happen to be expensive tend to be more at risk of being lost. Aside from that insurance is also depending on the value of your vehicle, so the more costly it is, then higher the particular premium you only pay.